What is Ravencoin (RVN)? Things to know about the latest RVN coin 2020

Ravencoin (RVN) a coin launched on the 9th anniversary of Bitcoin. So…

If you are looking to find out Ravencoin platform and potential invest RVN coin then this article is for you.

Ravencoin (RVN) is a blockchain-based peer-to-peer network designed to make efficient use of a specific function: the transfer of assets. It is built on a fork of the Bitcoin blockchain and is a truly open source project (no ICO, masternode).

You may not know: What is Blockchain technology? A step-by-step guide for beginners

What is the special feature of Ravencoin?

Although developed on a fork of the Bitcoin blockchain, it is possible to call Ravencoin is a hardfork of Bitcoin, but Ravencoin still has its own characteristics that make it stand out.

Both Ethereum and Bitcoin have the ability to transfer their assets, however, apart from that ability, both blockchain platforms want to integrate many other features. Private Ravencoin On the other hand, it only focuses on a single feature, which is asset transfer. Thereby, helping developers have an optimal protocol for each specific case in the ability that Ravencoin bring.

Maybe you are interested: What is Ethereum? Ethereum Basics for Beginners

Besides, the mining algorithm of Ravencoin to be x16r, which is different from Bitcoin. With this algorithm Ravencoin optimizes the ability to prevent ASIC miners that rely on powerful hardware capabilities from taking a big advantage in the mining process.

What is RVN coin?

RVN coin is the base currency of the blockchain Ravencoin It plays a key role in all network operations.

RVN coin was released on January 3, 2018 and did not undergo an ICO. Development capital is supported by Medici Ventures fund organization.

What is RVN coin used for?

Because the RVN coin is the base currency on the network Ravencoin blockchain so obviously it will be used to pay the transaction costs on the network.

Similar to Bitcoin, Ravencoin also uses the PoW consensus protocol so you can completely mine RVN coin like Bitcoin mining. The main miner reward is RVN coin newly created.

Currently, after Ravencoin halving, the block reward is now only 2500 RVN.

The Ravencoin network allows you to use RVN coins to pay dividends to asset holders proportionally.

As an example in the Ravencoin whitepaper given for your understanding: a lemonade store generates 10,000 LEMONADE tokens to raise capital and earns 100 USD at 0.01 USD for 1 LEMONADE token. Later on, the business shop is highly profitable and wants to reward those who bought LEMONADE tokens. With just one simple command, Ravencoin will transfer RVN corresponding to the ratio of LEMONADE tokens that those who are holding.

With Ravencoin you can create for yourself a unique token (unique token) similar to Ethereum’s ERC-721 token.

Each time you generate unique tokens will need to pay 5 RVN coin.

How to mine Ravencoin?

Similar to Bitcoin, Ravencoin also uses the PoW protocol, so you can completely mine Ravencoin. However the mining algorithm that Ravencoin uses is x16r, an ASIC resistant algorithm, you cannot use ASIC miners to mine Ravencoin (RVN).

Information about device configuration and settings, you can refer to details at: https://raven.wiki/wiki/Mining

List of mining pools that should be used to mine RVN coin: https://ravencoin.org/pools/

Should invest Ravencoin (RVN) or not?

Attention: no investment is 100% safe and every decision carries risk. In any case, it’s up to you to decide. However, below is some useful information that can impact the return on your RVN coin investment.

Since the source code of Ravecoin is open source, there is no fixed development team, anyone in the community can contribute to the development of Ravencoin.

Even so, there are currently the main groups of developers for Ravencoin which are: RavencoinDev, Tron, Chatturga. Also Bruce Fenton, Bitcoin Foundation board member, is an advisor to Ravencoin.

Not only that, there are around 430 Bitcoin developers supporting the Ravencoin project development. Together with Overstock.com financial support.

Currently, the field of digital asset technology Ravecoin is targeting has great potential, so having many competitors is inevitable.

Some notable names can be mentioned: Waves, Polymath, Bytom. These are all relatively famous projects and have achieved certain successes. Therefore, Ravecoin needs to work hard to not be left behind in this race.

Ravencoin’s development roadmap is divided into 8 phases and currently has completed phase 5 and is moving towards phase 6. You can find out detailed information about Ravencoin roadmap at https:// raven.wiki/wiki/Development.

With a project just over 1 year old but 80% of the development roadmap has been achieved, it can be said to be amazing. This confirms that Ravencoin is trying to go in the right direction as well as the development is of certain interest.

The role of Ravencoin developers cannot be denied when there is such a high speed of completion of the roadmap.

Thanks to that, Ravencoin will easily create trust for the community and investors. 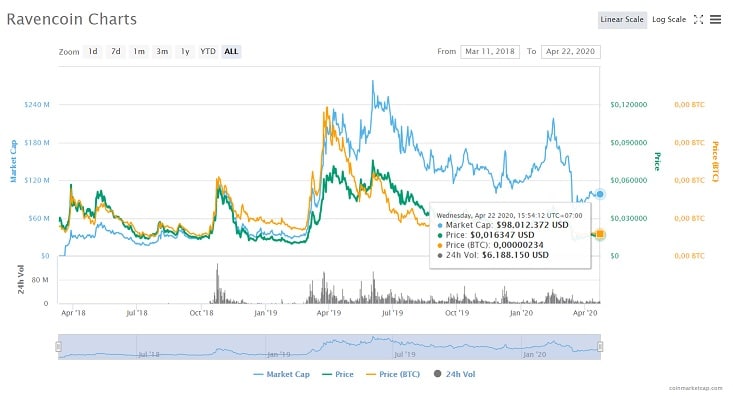 Present RVN coin price is trading at 0.0163 USD with low volatility in the last 24 hours. At one point, price RVN has increased to 0.08 USD and this is also the level price RVN highest ever. This price is set on 3/6/2019.

Where to buy and sell Ravencoin (RVN)

How to buy and sell RVN coin in VND

Currently, there are many exchanges that support cryptocurrency trading in VND, but separately buy RVN For prestige, I think the best currently is the Bitmoon exchange.

Below is the name of the exchange and a comparison table of transaction fees for your reference.

Although the international exchange has the advantage of trading volume as well as high liquidity, the disadvantage is that you cannot trade in VND. Almost every transaction buy and sell RVN coin All of you use USDT for transactions.

Ravencoin wallet should use

Depends on usage Ravencoin (RVN) your wallet that you will choose for yourself the appropriate wallet.

Suitable for those who want to store RVN coin long term and few transactions.

This wallet is suitable for those who regularly trade.

Alternatively you can use a wallet developed by Ravencoin itself:

This article has summarized the most basic information you need to know about Ravecoin and RVN coin. With this article, I hope that readers can grasp some of its investment potential.

What is Karura? Should invest in Karura project or not?
A complete guide to using JulSwap from AZ