What is ontology? Things to know about the latest ONT coin in 2020

Ontology was founded by the company Onchain (do Dahong Fei and Erik Zhang founder) in November 2017.

Onchain is a Chinese technology company that has been building blockchains and Distributed Network Architecture (DNA) for businesses since 2014.

Then in November 2017, Onchain launched Ontology.

The mission Ontology want to do that is to be a trusted, comprehensive decentralized network. The platform is focused towards connecting real-life elements with blockchain networks for businesses and organizations.

To do this thing, Ontology brought Ontology Trust Network.

The Ontology Trust Network is composed of 3 layers: 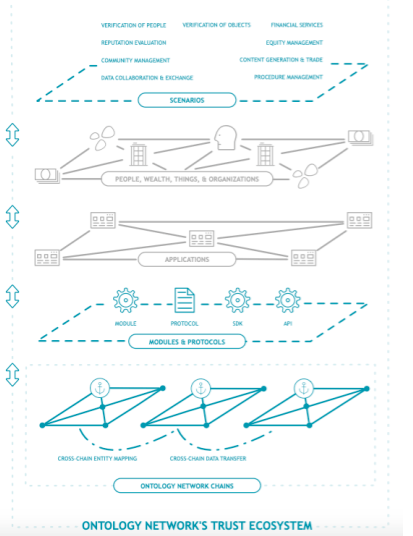 To maintain the stability and operation of this platform, ONT . coin play an important role.

What is ONT coin?

ONT . coin is the base cryptocurrency of Blockchain Ontology.

However, after completing the Mainnet on 30/06/2018, ONT . coin officially switched to running on Blockchain platform of Ontology.

Maybe you are interested: What is Neo? Things to know about the latest NEO coin in 2020

Besides the platform Ontology has a similarity with Neo blockchain it’s a dual token governance system. That is, outside ONT . coin there is another token that works on Ontology blockchain, ONG.

What is Ontology Gas (ONG) Coin?

With a fixed total supply of 1 billion tokens, ONT is allocated by the development team at the following rate:

With ONT wallet in the form of software on a computer OWallet wallet, official wallet of Ontology (ONT), is the most optimal choice for you.

Besides, those who have storage needs ONT . coin then form ONT wallet you should choose cold wallet. There are currently several cold wallets such as: Ledger Nano S, Nano X; Trezor well worth your choice.

In addition, the most optimal mobile application ONT wallet currently is the Trustwallet wallet, which you can refer to.

For those who often trade, the exchange wallet is the most optimal choice. Some reputable exchanges such as: Binance exchange, Bitmoon exchange, Huobi exchange,… all support ONT wallet.

Should I invest in ONT?

Up to now, more than 40 dApps have been developed and operated on ONT’s platform.

Currently ONT is ranked 28th on the chart according to Coinmarketcap with a large volume of transactions on exchanges.

However, to see whether to invest or not, depends on many factors, the market, luck…

You should research carefully and make your own decision!

Where is the reputable place to buy and sell ONT?

Buy and sell EOS in VND

Currently, there are many exchanges that support cryptocurrency trading in VND, but separately Buy and sell reputable ONT I think the best currently is the Bitmoon exchange.

Below is the floor name and transaction fee comparison table for your reference.

Although the international exchange has the advantage of trading volume as well as high liquidity, the disadvantage is that you cannot trade in VND. Almost every transaction buy and sell ONT All of you use USDT for transactions.

This article has summarized the most basic information you need to know about the platform Ontology. With this article, I hope that readers can grasp some of the investment potential of ONT . coin.