What is Monacoin (MONA)? Things to know about MONA coin 2020

Monacoin (MONA) was once dubbed Japan’s first cryptocurrency. So…

If you are looking to find out Monacoin and potential invest in MONA coin, this article is what you need to find

Monacoin (symbol: MONA) is a peer-to-peer (P2P) cryptocurrency created from the Litecoin hardfork on January 1, 2014.

You may not know: What is Litecoin? Things to know and the latest LTC in 2020

At the time of its launch, Monacoin use the same algorithm with Litecoin is Scrypt. However, after a while, Monacoin completely switched to using the Lyra2REv2 algorithm.

Monacoin launched with the ambition of becoming an alternative to Bitcoin and Ethereum in the Japanese market and was nicknamed by the development team as “Japan’s first cryptocurrency”.

As mentioned above, Monacoin is a cryptocurrency created from the Litecoin hardfork, so it has similar characteristics to Litecoin, or Bitcoin.

Even so, Monacoin also has its own distinct characteristics. The features that can be mentioned are:

Initially, Monacoin used the same Scrypt algorithm as Litecoin to resist ASIC miners. However, it will only be a while after ASIC miners can be compatible with the algorithm Scrypt, Monacoin has switched to using the algorithm Lyra2REv2 better ASIC resistance.

What is MONA coin used for?

Similar to Bitcoin and Litecoin, MONA oriented to become a means of payment. Currently, mainly MONA coin used in Japan. You can also use this coin to make purchases at the Bitcoinmall e-commerce site.

Besides, MONA coin It is also used to pay transaction fees in the Monacoin network and as a block reward for those participating in Monacoin mining.

How to dig Monacoin

Do switch to using algorithms Lyra2REv2, an ASIC resistant algorithm so you can only use CPU/GPU to mine Monacoin.

You can choose between setting up the miner yourself or joining the Monacoin mining pool. However, at the present time to maximize profits from Monacoin peach I think you should choose to join the mining pool to mine MONA.

Some mining pools you can refer to: ASICpool, Vippool, Suprnova…

Each pool will have different settings, so you need to carefully refer to each pool after choosing.

Should you invest in Monacoin?

Deciding exactly which coin or token to invest in is very difficult because the cryptocurrency market is very volatile. So, I will outline some key points for you to refer to then learn more and make your own judgment and investment decisions.

Currently, the Monacoin development team does not disclose the specific identities of each member. Members are completely anonymous. There is only one individual with the nickname Watanabe used to participate in discussions on cryptocurrency forums.

Monacoin’s development roadmap is not specifically announced and is not regularly updated. Along with that, Monacoin as a synthetic cryptocurrency from different coins. Blockchain is forked from Litecoin, the algorithm is similar to that of Vertcoin (VTC). This leads to question marks for the seriousness of the development team towards the project 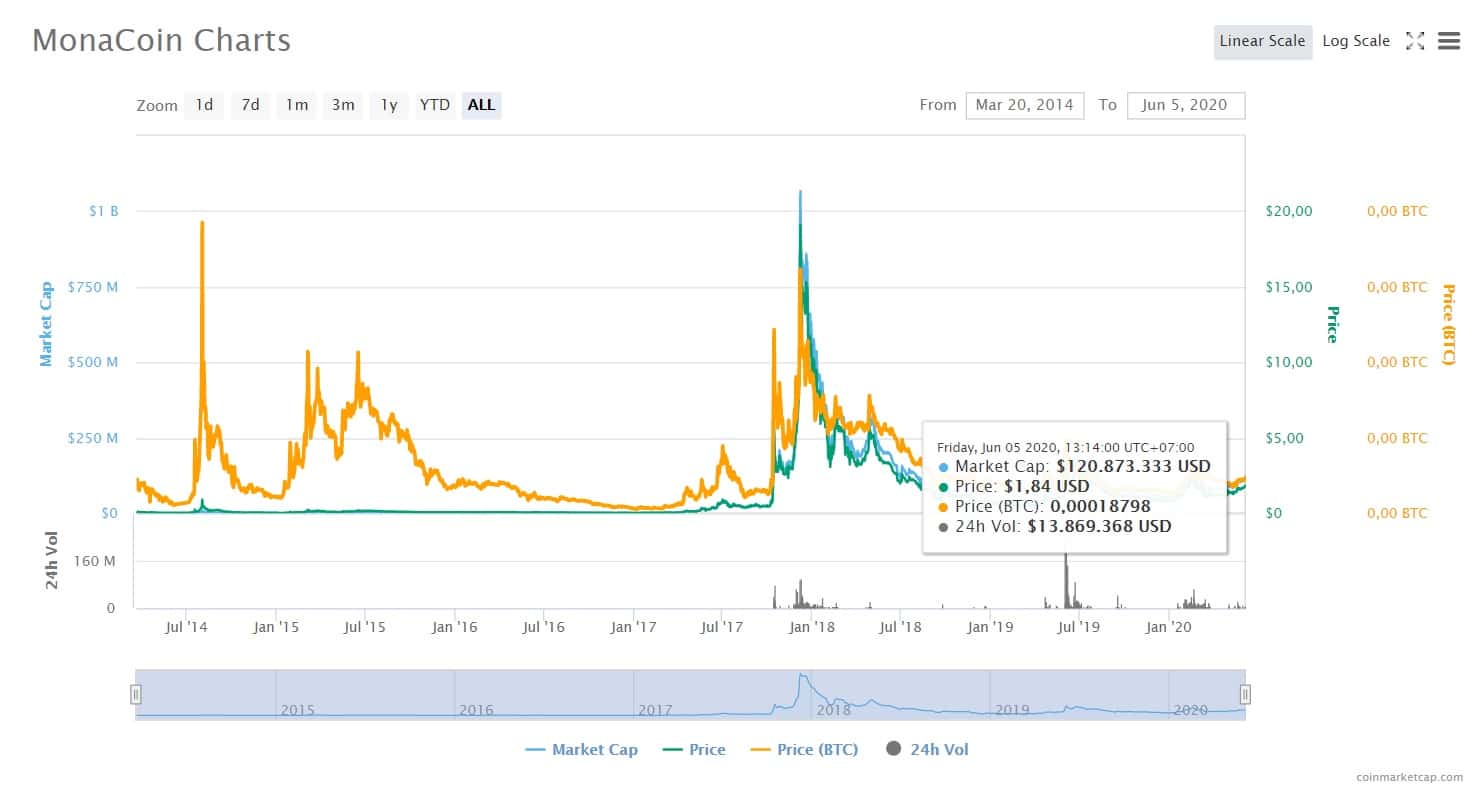 Currently, at the time of writing price MONA coin is being traded at 1.84 USD. Level highest MONA price so far is set at $20.23 (December 2017). That is, compared to the peak price, then MONA coin price Currently dividing nearly 20 times. A difference that makes you pay attention when you want invest MONA coin.

Where to buy and sell MONA coin?

Do MONA coin It is mainly used in the Japanese market, so many major exchanges have not yet supported it buy and sell MONA coin.

Some international exchanges that you can support MONA coin trading include: BitBank, Bittrex, Upbit…

Although the international exchange has the advantage of trading volume as well as high liquidity, the disadvantage is that you cannot trade in VND. Almost every transaction buy and sell MONA coin Your transaction uses USDT or BTC.

Currently, there is no VND floor that supports buying and selling MONA coin, when there is new information, I will update in this article.

Monacoin wallet should use

Depends on usage MONA coin your wallet that you will choose for yourself the appropriate wallet.

Suitable for those who want to store MONA coin long term and few transactions.

The advantage of cold wallet is that it is safe and optimal for storage. Cold wallets you can refer to to choose from are: Trezor One, Trezor Model T.

This wallet is suitable for those who regularly trade MONA coin. Most of you can store MONA coin at the exchanges that support the purchase and sale of this coin. Some exchanges you can refer to such as BitBank, Bittrex, Upbit…Although storing at the floor will be convenient for you to buy and sell, the exchange often faces the risk of being attacked by hackers.

In addition, you can use wallet platforms provided by 3rd parties such as: Electrum Mona or Coinomi to store MONA coins.

This article has summarized the most basic information you need to know about Monacoin and MONA coin. With this article, I hope that readers can grasp some of its investment potential.

What are Nations? Faraway’s first game project
What is Aaveghotchi (GHST)? The Complete Collection of Top GameFi Aaveghotchi