What are Waves? Things to know about the latest WAVES coin 2020

If you are looking to learn the background Waves and potential invest WAVES coin, this article is what you need to find

Maybe you don’t know: What is Proof of Stake (POS)? How to mine and mine POS . coins

Project Waves initiated by the Russian physicist, Alexander Ivanov in 2016 after collecting 30,000 BTC through a token sale that took place on Wednesday-Thursday of the same year.

The development team launched the blockchain Waves to address the shortcomings of the existing blockchain platforms at the time. Therefore, Waves focuses on improving speed, scalability, security, and user experience.

In 2017, Waves started cooperation with Microsoft Azure and became an official partner of Deloitte. In the same year Waves released a new consensus protocol, Waves-NG. Waves-Language helps increase transaction traffic up to 100 tps.

In 2018, Waves released a new mobile app that delivers most of Waves’ most popular features to smartphone and tablet users.

At now, Waves provides tools designed to facilitate development and running dApps, along with a number of other utilities such as decentralized exchanges (DEX) and stablecoins, encrypted messaging and even the gaming sector.

There is a special feature of Waves that it uses the protocol Leased PoS (LPoS) a variation of PoS (Proof-of-Stake) traditional.

With LPoS of the Waves, you can stake your tokens by “renting” them to the nodes running the network. The rental cost is 0.002 WAVES.

To participate in staking you need at least 1,000 WAVES. This number has changed and is much lower than the original request of 10,000 WAVES. However with LPoS, if you don’t have enough numbers WAVES coin necessary, you can still participate in staking by giving your WAVES to the public mining pool to rent nodes. You can choose for yourself the appropriate Waves nodes from the list at the link: https://forum.wavesplatform.com/c/pools

Almost the majority of blockchain platforms launched at that time were aimed at providing solutions to the problems related to the speed, scalability, and security of the traditional blockchain. So, Waves must have its own advantages to create a competitive advantage over other blockchains.

Here are some outstanding advantages Waves:

You can take advantage of all the advanced protocol advantages of Waves completely free of charge.

Waves designed to avoid programming errors that can lead to fatal errors so that it can seamlessly and securely interact with blockchain-enabled applications.

You can start with Waves quickly and easily with online courses, seminars, hackathons and support packages for developers.

What is WAVES coin?

WAVES coin is the base currency of the blockchain Waves. It plays a key role in maintaining stability, security, and economic impetus for network participants.

The total initial supply of WAVES coin is 100,000,000 WAVES and is distributed according to the following detailed ratio: 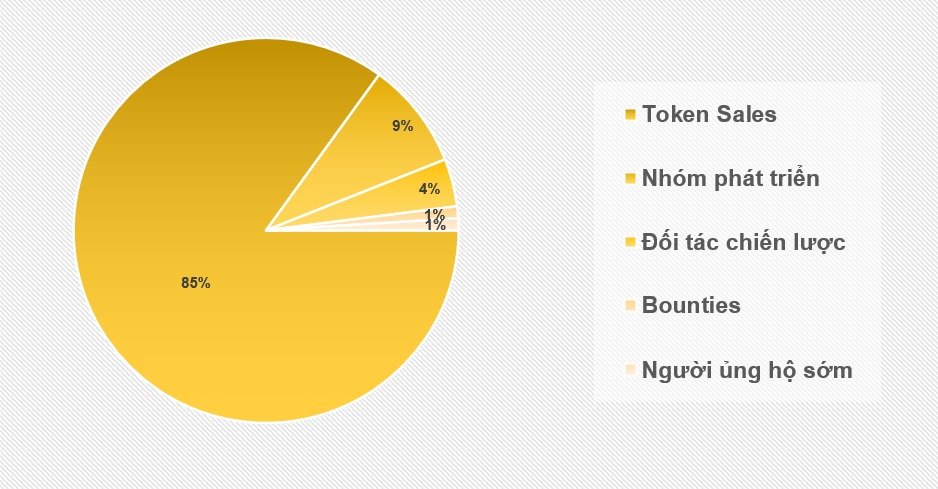 What is WAVES coin used for?

Because WAVES coin is the base currency of Waves platform, it is used frequently in Waves ecosystem (including: Waves DEX, Waves Wallet, Waves Keeper, Waves Labs) such as:

The condition for you to participate in staking full node on Waves is that you must own at least 1,000 WAVES.

When you participate in Waves staking, you will be rewarded with WAVES coin or WRT Token.

In Waves’ ecosystem, there is also a decentralized exchange, Waves DEX. When you make transactions on this DEX, you have to pay fees in WAVES coin.

The condition for you to participate in Waves staking is to have a minimum of 1,000 WAVES. However, if you do not have enough WAVES balance and still want to participate in staking, you can rent a full node stake on Waves pools. The fee for 1 rental is 0.002 WAVES.

Similar to the Ethereum platform, you can issue your own tokens on the Waves platform and conduct ICOs and IEOs to raise capital through Waves coins. However, at the moment, no ICO or IEO has been released on Waves.

Should I invest WAVES coin or not?

Deciding exactly which coin or token to invest in is very difficult because the cryptocurrency market is very volatile. So, I will outline some key points for you to refer to then learn more and make your own judgment and investment decisions. 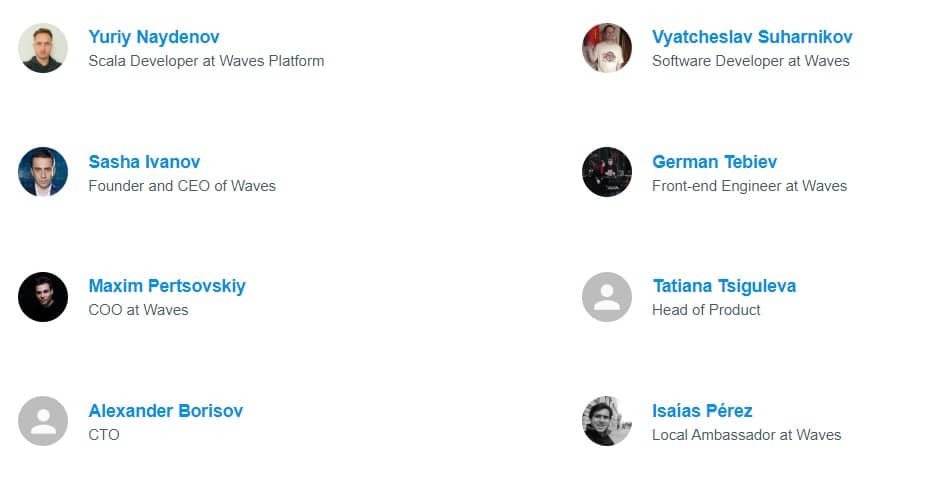 The development team of Waves blockchain is a collection of talented names from many countries and different fields such as finance, blockchain, cryptocurrency, marketing,… here are some outstanding members of the project:

If you want to see more details about the members of the Waves development team, you can refer to the link: https://www.linkedin.com/company/waves-platform/. 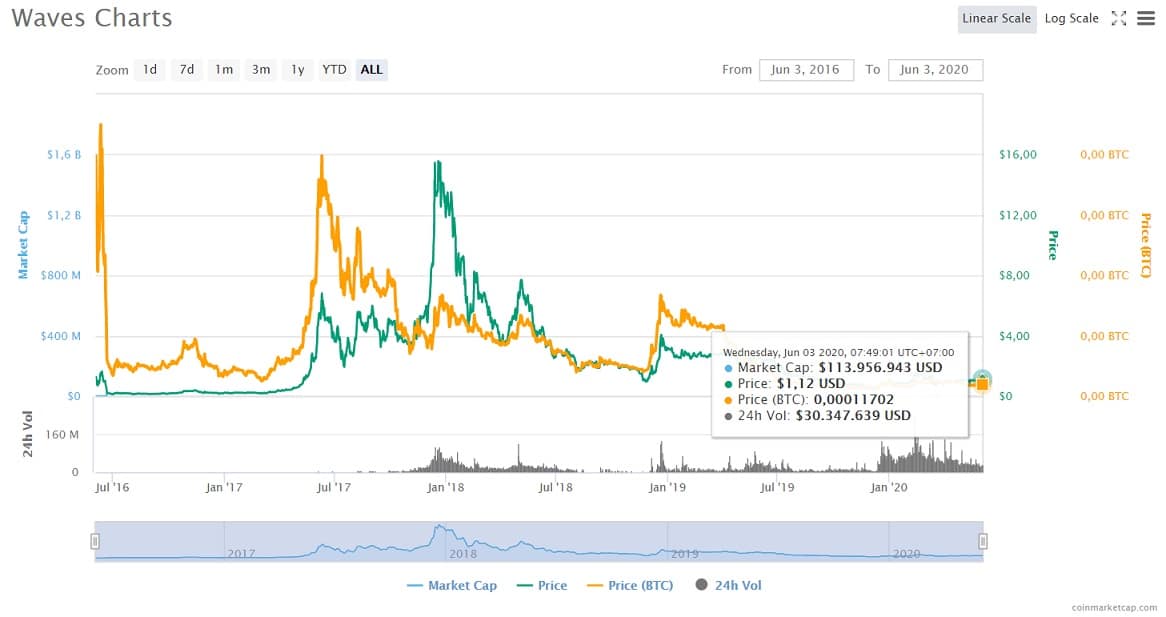 Currently, at the time of writing price WAVES coin is trading at 1.12 USD. Level highest WAVES price so far is set at 18.07 USD (December 2019). That is, compared to the peak price, then WAVES coin price Currently dividing nearly 18 times, a difference that makes you pay attention when you want invest WAVES coin.

Where to buy and sell WAVES coin?

How to buy and sell WAVES coins in VND

Currently, there are many exchanges that support cryptocurrency trading in VND, but separately buy WAVES For prestige, I think the best currently is the Bitmoon exchange.

Below is the floor name and transaction fee comparison table for your reference.

Waves wallet should use

Depends on usage WAVES coin your wallet that you will choose for yourself the appropriate wallet.

Suitable for those who want to store WAVES coin long term and few transactions.

This wallet is suitable for those who often transact.

This article has summarized the most basic information you need to know about WAVES platform and WAVES coin. With this article, I hope that readers can grasp some of its investment potential.

The first 3D swordplay game on blockchain –
What is CertiK Chain? Detailed information about the CTK . project